A few years ago I discovered, at annual inspection time, that I had only flown my Cessna 150 for 40 hours since the previous inspection.  I knew that was not enough to be good for the airplane.  I began thinking about selling it.   At about the same time my old friend Charlie Bell, in Texas was thinking about selling the Minimax project he had been working on for some years.  He had decided he was not going to finish it.  That helped me make up my mind about selling my Cessna.  I sold it and bought Charlie’s Minimax project.   I had watched Charlie building on it and I knew the workmanship in the finished wings and tail was absolutely first rate.  I needed to build the fuselage when I got it.   Charlie had bought almost every option offered for the kit, so all of the parts were there.   Charlie had planned to install the ROTAX 447 on it, but I just can’t stand the sound of an engine cruising at 6500 RPM.  I was impressed with the ½ Volks Wagon engine ( V W engine that has been sawed in half to make it a 2 cylinder horizontal opposed style) that Jim Goodyear had used on his Hummelbird.  I made an inquiry from the person who builds-up those engines and found that several of those engines were in use in Minimax airplanes.   I contacted a couple of these people and found that the airplanes performed quite well with the engines.  One guy sent me about an hour of video he had shot of his in flights.   I made up my mind and ordered the engine.   Then I began building the fuselage and modifying it to fit the engine.

Right now (Aug 2012) I am painting the airplane.  For many years, Ultralight builders had been using latex paint on their airplanes and have not had problems with it.  So I decided to go with acrylic latex.  It will give me the texture I want, and just about the right amount of gloss.   Not glossy, but  not dull either.  I chose the WW II PT-19 colors, blue and yellow.  Since I registered this airplane as an Experimental Airplane and not a light sport, I decided to use the medium weight fabric and not the light weight fabric that most of the hundreds of previous builders had used.   This would have a few benefits.  First, I have no weight restriction that most people had when they built their Minimax airplanes to fly under Ultralight Rules.  That is the main reason light weight fabric was used on most of them.   Second the slightly heavier weight with paint would add a little weight to the tail.  This airplane with the ROTAX engine would have come out near the rear of the CG envelope.  However, the VW engine is about 20 pound heavier than the Rotax, so my airplane might be just a little nose heavy.  The extra fabric weight on the tail will help me with that.  Also, I chose to mount the battery behind the seat and not up front so that will also help.  Then, of course, there is the fact that the medium weight fabric will be much less susceptible to inadvertent damage in the hangar.   Since the airplane had originally been designed for a 25 HP engine, and I was using a 45 HP engine, the little extra weight will not make this airplane seem underpowered.  The designer offered all of the engineering data to show that my estimated flight weight will be well within the engineering stress limits for the design.  This airplane is designed for plus 4 G’s and negative 2 G’s.

This engine modification uses an aluminum oil line in the oil pressure system which runs outside the engine and wraps several turns around the intake tubes from the carburetor to the intake valves.  This serves both as an oil cooler and a heating source for the air going into the cylinders.   However this air is warmed downstream from the carburetor.  The engine builder says that carburetor ice has never been a problem, but I was not comfortable with that.  I have designed and built a more or less standard (exhaust heat) carburetor heat system that is operated in the normal way with a push/pull knob in the cockpit.  I feel much better having that option.  This geographical location (warm and humid for much of the year) is an ideal situation for the formation of carburetor ice.

Of course there are a lot of areas where the airplane designer cannot help the builder because of the selection of personal options.   The instrument panel is one of those areas.   I had decided that I would install a turn needle instrument just in case I ever got into poor visibility inadvertently.  Having a gyro instrument would insure that the airplane could be flown without reference to the horizon or ground.  However, when I added up the cost of the instruments, it came out to be around 1,100 bucks.  I thought about it and decided to go for the DYNON D-10A Electronic Flight Information System (EFIS), which roughly doubled the instrument cost.  This is a single instrument that has a color electronic display with attitude indictor, gyro compass, airspeed, altimeter with transponder encoder, rate of climb, G meter and a clock installed in one instrument that is 4 x 5 inches.  This saved a lot of instrument panel space.  It gave me room to install dual EGT and CHT gages.   Designing the instrument panel so that everything will fit (as you guys who have gone thru this drill well know) takes a while.

Doing all of the design and building for the options on the airplane has used up a lot of time.  I had originally estimated that I could have the airplane completed by Christmas, 2011.  As most builders know, the norm is to need more time than estimated rather than less.  I did that and now I hope to have it flying sometime late this summer.

Big day today,  I finally got around to cranking the engine on my Minimax airplane.

The guy who built up the engine had run it for a few minutes prior to shipping it to me a couple of years ago.

I had approached trying to crank it up, with mixed emotions.  I really wanted to get it going and fly it, but I knew many homebuilders had problems when they first began to run their engines.  I had my fingers crossed when I finally pushed the start button.

I had taken a small plastic squirt bottle with me, put some gasoline in it and squirted some gas into the carburetor and gave it a try.

It fired right up and ran great for about 45 seconds and then quit.   I decided it might run better if I turned the fuel shut-off valve to the ON position.

It cranked right back up and ran fine.   It has a battery type ignition firing the bottom spark plugs and an aircraft magneto firing the top spark plugs.  It ran fine on both ignition systems.

It was a good feeling to have the thing running with no problems.  My instructions called for it to be run about 5 minutes, to get all the parts warm.  Then to shut it down and cool it completely down to ambient temperature.  I did this 3 times.  I set up an electric fan to help it cool down faster so I didn’t have to wait over for over an hour for it to cool completely down.   The fan got it cool in 30 minutes or less.  The thought behind this is to get all of the new metal parts hot and have them expand and contract a few times so they will learn to run together as a single machine.

Next I will do a few taxi tests to see how the ground handling is, then the big event will come when I fly it for the first time.  Since the inspection is complete and I have the homebuilt airworthiness certificate, I don’t have to wait for anything to make the first flight.  I can do it when I am ready.

From all of the information I have read over the years, it is best not to schedule this event.  That way no one is disappointed if it needs more adjustment or the weather is not optimum.   When everything is right, just do it.

That day should come soon.

The first lift-off occurred for my homebuilt Minimax airplane N717KE, at about 4:38 PM, yesterday afternoon about 20 minutes prior to sunset.  A crosswind had been blowing across the runway late in the afternoon, but as the sun got low, it slowed down to about 2 MPH.   I decided to go for it.

Nothing dramatic, I just lifted off, got up to about 10 feet and reduced the throttle a little and settled back down to the runway.   The runway at Enterprise is 1 mile long, which, for a such a slow airplane,  gives plenty of room to takeoff, fly about 2,000 feet and land with lots of room left.   I made 3 flights in this fashion.  My highest altitude was never over 50 feet.  Caution for such an airplane that has never been flown before is definitely in order.    Next time I plan to climb up about 3,000 feet above the airport and just circle the runway.  That way if anything goes wrong, I am in a great position to land   I will not venture away from the airport until I have over 1 hour on the airplane.

I must say that flying such a light airplane is a nice experience.  It flies very well and I like the feel of the controls.

My friend Charles Bell built the wings and tail and then I bought the project and completed it over about 2 years.  I can fly into old age with this airplane.

One of my friends at Enterprise saw me taxiing out for my first taxi test about 15 Nov, and snapped this. 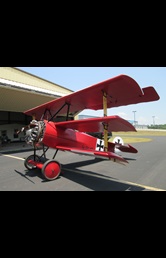 I have always dreamed of flying a WWI fighter aircraft. I built several types as a young boy building and flying uncontrolled models. This is my first attempt at building a full size replica. I purchased a set of Ron Sands' Full Size Replica Fokker DR1 Plans several years ago and have finally decided to take the leap.

I purchased a boat load of wood in June of 2012 and have been plugging away at this project a couple of hours a day since then. I have all of the wing ribs complete and am half way through the completion of the wing spars. I will be ordering tubing in the near future and will begin the process of constructing the fuselage.
I expect the project to take several years and a array of new learning objectives on my part, but what the heck...that's why I started it in the first place. So, if anyone is interested in seeing the project up close and personal, just stop by my hanger at Enterprise Airport whenever the door is open and say hello. I usually have a pot of coffee going.
Link to Jerry's Project Pictures